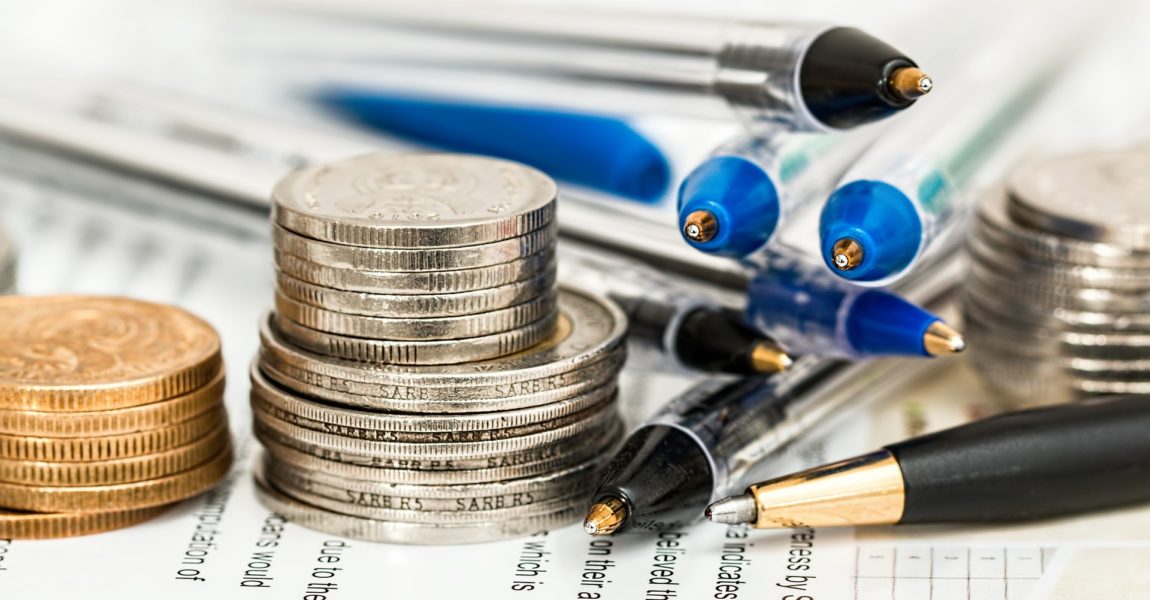 Subsistence minimum and social minimum in 2017

The Policy Agenda published the subsistence minimum values in 2016 and 2017 as well, on the basis of the commission of Friedrich Ebert Stiftung and the Hungarian Trade Union Confederation. This task was performed by the Central Statistics Office, starting from the change of regime until 2015, and it is considered as an important social indicator that gives feedback on the social processes every year.

The amount of subsistence minimum shows the income that a household requires in order to constantly provide its members the needs of a modest standard of living – that is conventionally appropriate at the society’s specific level of development. Therefore, the subsistence minimum we have shown, is not a poverty threshold, but an income that allows the satisfaction of needs beyond the basic needs as well. That is, if any unexpected expense is required, either the replacement of a small household appliance or a temporary loss of income due to illness, the household has no coverage for this.

In 2017, based on the previous CSO methodology and the household statistical data collected by the CSO, the amount of subsistence minimum per individual was: 90 450 HUF. In the case of households with two earning adults raising two children, it was: 262 305 HUF.

At the presentation of the subsistence minimum level in 2017, we also indicated that an old/new measure is needed to define the social minimum.

“it means a modest consumption level, in addition to satisfying the basic needs, and besides rational management, it also provides the opportunity to consume goods and services that have already become a mass demand at a certain level of economic, social and cultural development. This minimum, in extraordinary cases, also provides some possibility for realignment and reserve.”

The Policy Agenda, based on the subsistence minimum calculation, publishes this value in 2018 for the first time (regarding years 2017, 2016, and 2015). Using the statistics database of households’ budgets (containing detailed data on expenditures and revenues), we determine the amount of minimum subsistence for different households in the examined year. Next, we determine which of households living above the minimum subsistence can save from their income, acquired in the given month.

In order to avoid the distortion of the disproportionate sample, it is also a condition that the saving ability of the household may not be unrealistically large or small. For this reason, out of the households that have savings and live above the minimum subsistence, we ignored 5% of those households, that admitted the lowest and highest savings.

With regards to the definition of subsistence minimum and social minimum, it is an interesting data, how many people live below the social threshold, in the aspects of regions and settlement types. Based on the income relation of the households, there is a significant difference in the location of the specific household. In case of subsistence minimum 40% of those living in towns live below this level, while in the capital, proportionally 25 percentage point less than that of the previous. The same difference can be found in the social minimum. 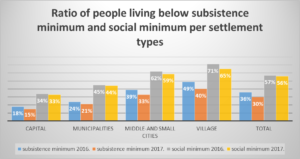 Regionally, too, significant differences can be found: 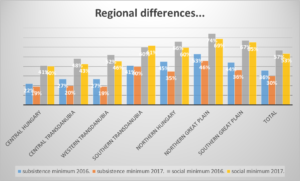 Based on the structure of the Hungarian society, it looks as follows: 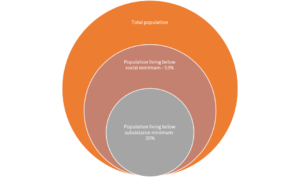 The minimum subsistence calculation was made using the anonymized data of the Central Statistics Office’s Household Budget and Life Circumstances Data Collection log of year 2017. The calculations and conclusions drawn from them are the exclusive intellectual products of Policy Agenda as author.

The research was performed with the support of the Friedrich Ebert Stiftung and the Hungarian Trade Union Confederation.